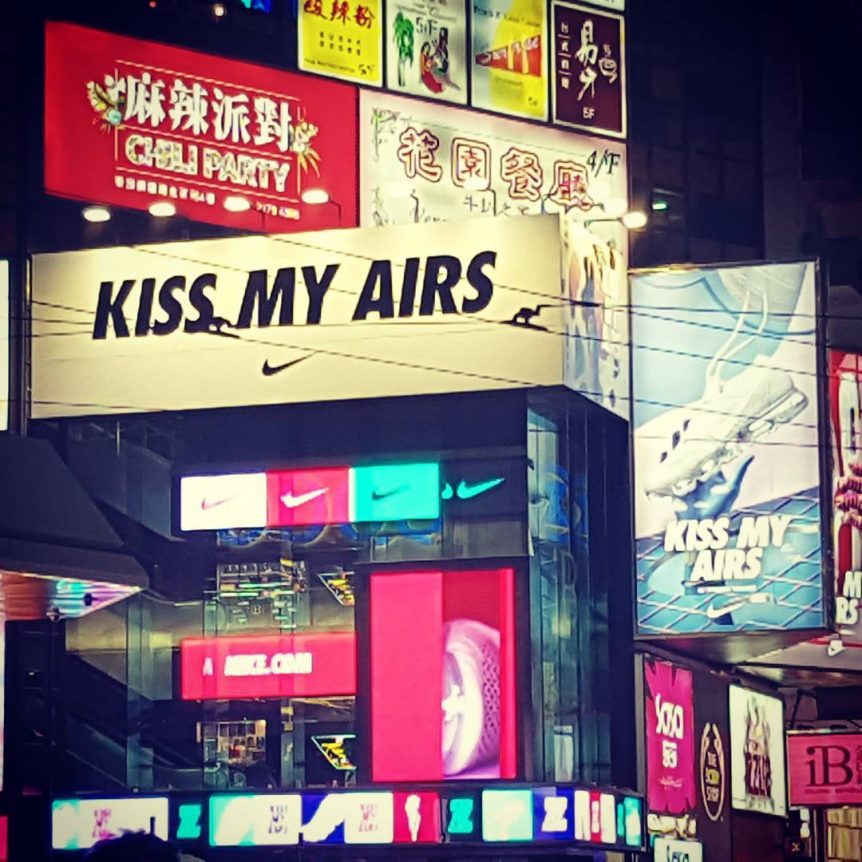 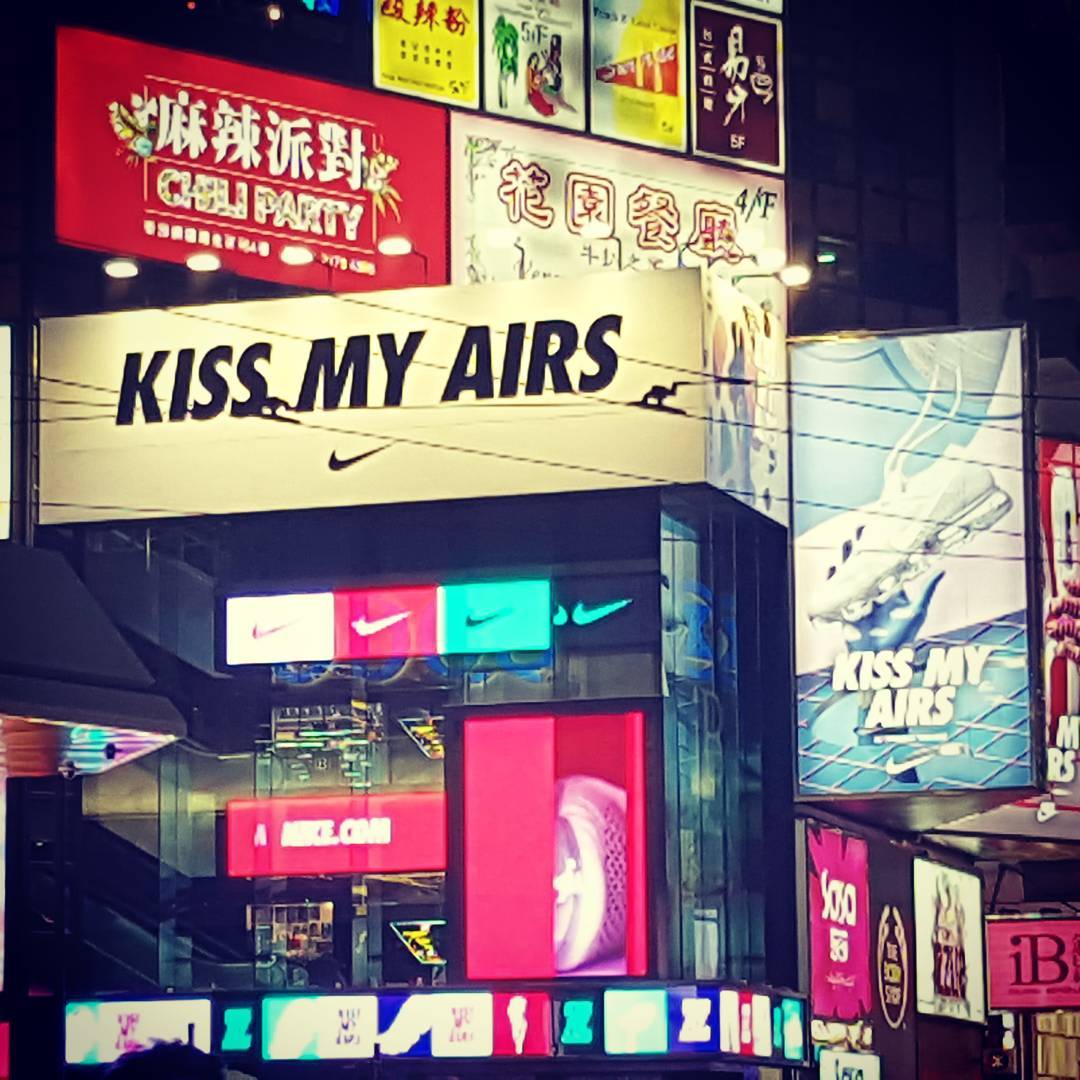 I spent two weeks in Asia this past spring, visiting Hong Kong, Beijing, and Tokyo. Of course I took photos of the Big Buddha and the Great Wall, but unlike most tourists’ photos, probably half of mine are of the brand positioning American companies use in Asian markets.

Brand positioning is “the act of designing the company’s offering and image to occupy a distinctive place in the mind of the target market.”

I took this shot of the Nike billboards featuring their global “Kiss My Airs” campaign in Roppongi, Tokyo. As a runner, I’m a big fan of Nike apparel; but as a marketer, I’ve long studied how Nike positions and promotes their brand. Nike print advertisements rarely miss the mark, and their commercials have a cinematic quality designed to make every athlete believe they, too, are capable of victory.

In Nike’s Asian print advertising, most of the subjects were not Asian. Only one print piece, inside a store on Sneakers Street, featured an all-Asian group of runners. Other print ads featured white runners, with maybe 1 Asian runner in the shot. A handful of ads featured shoes only.

Where are the runners?

Nike had a number of stores in the markets of Hong Kong (usually two or three on a block, like on Sneakers Street), but I never saw anyone running or doing outside activity in Hong Kong or Tokyo.

I bring my running gear on most trips, and my goal was to see my new surroundings in an easy 3-mile trek through Hong Kong. I didn’t leave as early in the morning as I’d hoped. Running solo before sunrise in the empty streets in a foreign country didn’t jibe with my safety concerns. When the sun came up and folks starting populating the streets, I laced up and headed out.

During the first quarter of a mile, I felt the back of my throat start to burn. I started coughing. A lot. My lungs started to burn. More coughing. I made it about three quarters of a mile before the air pollution stopped me in my tracks and forced me to turn around and head back. Between the air and having to stop often for traffic at crowded crosswalks, I see why people don’t run in Hong Kong.

In fact, during two weeks of travel, I only saw one person running outdoors besides myself — a Beijing man who looked about 55 was geared up from head to toe, booking it down the street. (The air pollution in Beijing was so bad that visibility was about 2 blocks. I don’t know how he was breathing while running.) Through conversation with several Chinese, I learned that running is just not part of their culture: “We prefer tai chi.”

Can Nike’s advertising change a culture?

If you sell running shoes, how do you get a nation of people to start running? That would require a helluva paradigm shift. Perhaps Nike is not interested in changing the culture but creating a place for itself in the culture. Selling running shoes in this market will require new brand positioning.

Almost everyone I encountered in Asia wore sneakers as their daily, walking-around shoes. Do Nike execs care that their running shoes aren’t being worn to run? Absolutely not — they care about sales. By shifting its positioning in the market from “sports apparel brand” to “must-have street style brand,” Nike is attracting new customer segments and widening its range of buyers.

To support that shift in brand strategy, Nike created a 17-second spot for its “Kiss My Airs” campaign, featuring G-Dragon, a South Korean rapper, singer, songwriter, and dancer.

In the spot, G-Dragon saunters around a rooftop wearing a black and white jacket and hoodie. He climbs a ladder, showing off his Nike Air VaporMax shoes. By using edgy music and a popular entertainer, Nike is targeting a younger generation of Asian consumers who follow style trends set by celebrities like G-Dragon.

Nike is using a new angle (street style) to sell its existing product (running shoes) to new customers. You don’t have to be a billion-dollar brand in order to use Nike’s brand positioning strategy to break into a new market.

What new markets are just waiting for you to bring your existing product to them to solve their problems? What angle will you take to reach them?